I originally wrote this as a PDF but then felt guilty that I hadn’t updated my blog for ages, so recycled it.

This “how to” charts the progress of my second Cry Havoc outfit, with the odd reference to the first one. It assumes some prior sewing experience and experience of making kirtles and shifts.

Playing Lady Cecily Martyn, Countess of Winchester, at Cry Havoc, was a great opportunity to try my hand at making costume from the transitional period between medieval and Tudor times. Now I’m not a reenactor or a historian, my time and resources are pretty limited, but I do love a good challenge!

The first thing I did was to get a copy of The Queen’s Servants, by the same folk that did the Tudor Tailor, and have a good read. What I did learn is that my existing shifts and kirtles would probably do the job quite nicely. I did make one with a more heavy-duty lining to give me the correct shape, but  I’m not going to go into how I made those as there are loads of resources about for that elsewhere. I’ll skip to the fun stuff.

Looking at the patterns in the book, it was clear that high status kit meant lots of fabric. It also needed to be quite sturdy in order to drape correctly. I took a guess and figured that I’d need at least 5 metres of it.

So where to find fabric? Wool was always an option, and silk, but really, my budget probably wasn’t going to stretch to that, not if I needed 5 metres of it. So I had a look, over a fair amount of time, at portraits from around that era to see what kinds of patterns were used. Over time I started to get a feel for what looked “right”. I have also looked in enough fabric shops to know what different kinds of fabric look and feel like. Then luck happened, I found a set of curtains in a car boot sale that looked for all the world like many of the fabrics that I had seen, the pattern was nice and large, and in a “pomegranate” style. I lucked out on the red dress a year back as well, I found a set of curtains in a charity shop that did the job. The nice thing was about the blue curtains is that they were much lighter weight than the red ones, but still had a nice drape to them. I think they cost about £3. They also seemed to be some kind of cotton mix, better than synthetic in hot weather.

I adapted my “old faithful” kirtle pattern for the bodice of the dress. I know it fits, so why reinvent the wheel? Mine is cut with quite straight sides, but if yours curves about, try straightening the sides for that more structured Tudor look. Using a dress form, I made a mockup out of cotton and cut the neckline into a square shape. I used the mockup as a lining later.

I knew that I had tons of fabric, more than I would realistically use, so opted for the “pendant” sleeves from the book. These are the ones that hang down and look like “angel” or “trumpet” sleeves. I used my kirtle sleeve pattern for them as well, tracing the s-shaped top, then folding in half and drawing the trumpet shape. I lengthened it a bit as per instructions in the book. The great thing about the s-shaped top of the sleeves is that the seam falls down the back of your arm. When translated to a pendant sleeve, it makes the whole thing hang so much better, who knew! I lined this with some acetate lining from the stash as I wanted it to be breathable. In an ideal world, I would have used silk…but there we go.

I then had loads of lovely fabric left over from which to make the skirt. In the book, the skirt is made of four flared panels. I simply cut the panels as wide as I could make them, making sure that the waist measurement was large enough to create a few pleats at the back. I created a “puddle hem” i.e. one that was about 4-5” too long for me. Again, it gave that impression of impractical luxury (oh look at me, I’m so rich I don’t need to walk about, I just send people to fetch things). Well, costume design is about portraying characters after all! I left the skirt unlined as I figured that the weather would be hot and the fabric draped nicely enough without it.

When putting it all together, I tried to be quite careful with matching the pattern on the bodice of the dress as that is usually the first thing that people see. I placed the pattern so that I would have a nice motif in the centre. I don’t know how careful our forebears were with pattern-matching, and, given the high cost of fabric, imagine that they didn’t go in for it much, but I wanted the dress to look as though it had been made with care. It was a detail that really paid off. (I wasn’t quite as careful with the skirt). A few years ago, I came across a neat trick for making hooks and eyes stay put, alternate them so that you have hook, eye, hook, eye etc down one side and reverse for the other side.

Now for decoration! Mostly all it needed was a velvet ribbon sewn alongside the neckline. Again, I looked at historical examples, and they seemed fairly plain. However, plain didn’t suit the character, so I popped out to the nearby St David’s shop and bought a beaded necklace in colours that matched the ribbon. I sewed this alongside the ribbon and it gave just the right amount of bling for this high-status character. 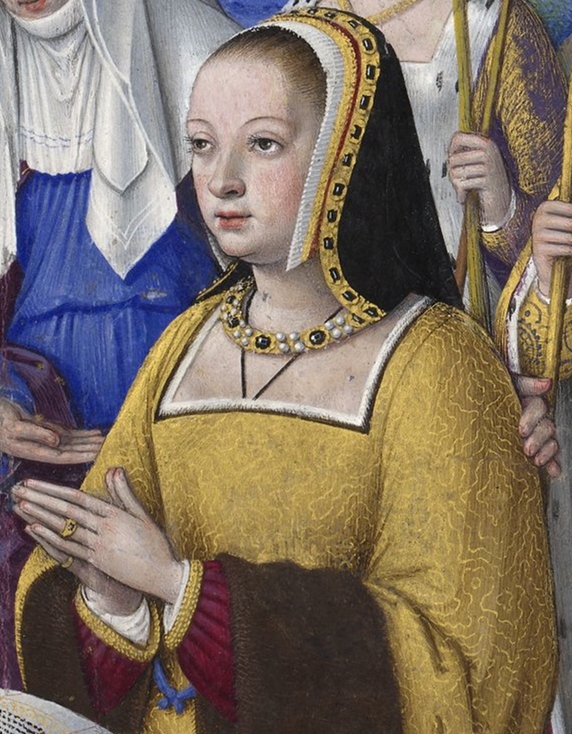 At the first Cry Havoc event, I made myself a gable hood as I thought they looked cool. While it certainly kept the sun off me, I found it as unstable as anything. I also may not have made it very well. I got sick of having no peripheral vision and it covered my eyes whenever I turned my head. The gable hood had to go! I cast about for alternatives and alighted upon Anne of Brittany. She seems to be wearing an early type of French hood. It seems to be simpler than later versions, and appears to be based on a stiff coif-style foundation, with a decorated veil. For some reason, many modern versions of French hoods have them sticking up. The ones in the picture didn’t seem to do that, but followed the line of the head which rises naturally. Maybe this illusion is to blame.

Enter Tarquin. Tarquin is the polystyrene head form that I bought from Morplan and he’s what I use when I want to pattern any sort of headwear. Using the pictures of early French hoods as a guide, and there’s a pretty good tutorial here.  I created a paper pattern by pinning lining paper to Tarquin and drawing in the shape that I wanted. First I did the front part of the coif-thing which looked like a headband, then a strip at the back to hold it in place when my hair was up. When these had all been sellotaped together, I cut it off at the back, traced it onto a fresh bit pf paper and I had a pattern!

I cut this out of buckram, edged it with wire and covered it with bits of fabric that I had kicking about, plus a bit of trim stashed from goodness-knows-when. French hoods have this strip of fabric on the inside with very fine pleats. No idea how they managed to do these. I used a ruffle foot to gather a strip of linen in the middle and tried ironing it down. When I held it to the inside of the hood it looked daft and flared out like a Victorian mob-cap. But I was in a hurry, so I cheated and ran a line of gathering stitches along the front edge to stop the gathers from flaring. It worked.

Having stitched the frill to the inside of the hood, I found a bit of black velvet large enough for a veil. Looking at the contemporary paintings, I could see that the front edges of the veil reached to the shoulder. All I did was hem it, add some beads to the front edge and pin in place. If you’re feeling lazy, you could always sew another charity shop necklace there instead.

My French hood was done! I felt that it was much more stable and actually more flattering than the gable hood.

Accessories maketh the costume. Most of it came from charity shops too. I wore a long chain and a many-stranded fake-pearl necklace. The pendant was a find from New Look, it used to be a pair of earrings. I saw them one day, figured that the components looked really quite historical and nabbed them. A pair of pliers and a jump-ring later, and I had a pendant. The belt, yep, charity shop..I think it’s supposed to be a knitted necklace.

There you have it, the story of what is probably my cheapest and most favourite costume.